BIO: ALEX BLAKE I was a integral participant and a in demand professional Musician during the late forties through 1959 when he migrated to New York City to continue his amazing musical career. During his tenure in Panama he performed/recorded/and toured with the biggest names of Music in Panama at the time. He performed at/in the most important establishments of the day up to and including Club Union, The Panam Hotel, The Carnivals every year and the Presidential Palace.
Today he is a Historian of the highest order with very lucid and articulate accounts of the music and entertainment scene of Panama during that period. Speaking fluently in both Spanish & English he provides his audiences a tangible and realistic chronology of Panama's music history. The following provides a short list of his resume at that time.
RESUME: 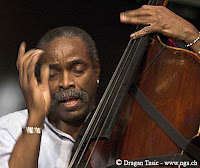 AGE: 56 BORN 1951 PANAMA CITY
Alex Blake is one of the most preeminent Bassists in the world today. His phenomenal performances are well documented as is his singular ability to play the Acoustic Bass with demonstrative originality. His style to play the instrument both melodically and percussively effectively widens the perception of everyone who hears him perform.
In addition to his expansive resume of performances/tours/recordings with the greatest names in music, including and not limited to: Dizzy Gillespie, Freddie Hubbard, McCoy Tyner, Betty Carter, Nancy Wilson, Manhattan Transfer, Stan Getz, Jimmy Buffet, Billy Cobham, Harry Belafonte, Sonny Rollins, Earl Klugh, and so many more.
His experiences in Latin music is equally impressive having performed/toured/recorded with but not limited to: Tito Puente, Machito Y Su Orquesta, Celia Cruz, Patato Valdez, Mongo Santamaria, Ray Barreto, Charlie Palmieri, La Lupe, and many, many more.
Alex was a major contributor to the success of the Third Annual Panama Jazz Festival as Bassist with the Randy Weston Trio.

http://web.mac.com/thestrength
Russel Blake has been a Professional Musician/Solo Artist/Educator for 35 years. He was instructed by his Father Alex Blake and his Brother Alex Blake II both of whom are professional musicians. All of his Theory, Compositional and Musical Arrangement skills are self- taught. Thus far, he has Performed/Toured/Taught in 65 Countries on six continents.
As a Educator he has taught as a Adjunct Professor of Electrical Bass Studies at five universities across the country. He is the creator of “The Universal Language Music History & Cultural Programme" of which Mr Blake has taught a variety of audiences from Kindergarten - High Schools, Colleges, Universities, Senior Centers, Libraries, Prisons, Hospitals, Military Installations & Art Galleries about the history of Music. He has been contracted by the US State Department to perform as a Ambassador Of Goodwill to Eight West African Nations. He has also been contracted to teach/perform by the US Defense Department’s “Defense Advanced Research Agency”. He is also a recipient of the Kellogg Foundaton’s prestigious Artist In Residency Award.
As a Concert Soloist, Russel has and continues to perform all over the world. He has developed a unique ability on the Four String Electric Bass which he calls the Melodius-Chordal Technique. He currently has 432 pieces within his repertoire encompassing Classical, Spanish Classical, Traditional Jazz, Classical, Brazilian, Opera, Latin & Pop Music Idioms.
As a Bassist a short list of whom he has performed/toured/recorded with includes: Sonny Rollins, Chaka Khan, Pharoah Sanders, Brenda Russell, Hugh Masakela, Cybill Shepherd, The Lion King on Broadway NYC, Dreamgirls on Broadway NYC, Wynton Marsalis, Dee Dee Bridegwater, Harry Belafonte, Gil Evans, Sam Rivers, Melba Moore, Gloria Gaynor, Clark Terry and Mary Wells.
His experience in Latin Music includes but is not limited to performances/tours/recordings with: Alex Y Su Orquesta, Machito Y Su Orquesta, Rafael Cortijo (Founder of El Gran Combo), Hilton Ruiz, Jorge Dalto, Dave Valentin, Michel Camillo, Paquito D' Rivera, Chucho Valdez, Alex Acuna, Pappo Lucca, etc;..
In closing: The Blake Family would provide a very unique highlight to the Panama Jazz Festival in both Education and Performance. With History seminars by the Elder Mr. Blake to Duo and Solo Concert performance's from both Alex Blake II & Russel Blake, the experience would truly add a dynamic component every Panamanian could be proud of.