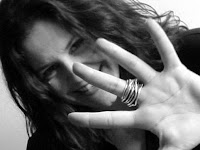 Susanna Stivali
(Rome - Italy)
Jazz singer, composer and lyric writer. Her voice tells a melody, in the wake of vocal jazz tradition, but it also acts as an instrument, in search for new sound paths and encounters with other instruments. She starts studying music, taking piano and classic singing lessons with M. Luigi Rumbo and Ms. Mara Rhormann, then she approaches jazz singing with Mark Murphy, Barry Harris, Bob Stoloff, Mily Bermejo. In 1997 she obtains a scholarship at the Berklee College of Music in Boston, where she lives for about two years. In the United States she has the opportunity of deeply focusing in the study of Afro-American music and culture, and is the solo singer in the Reverence Gospel Choir conducted by M. Dennis Montgomery III. Since 1997 to date she has participated in several competitions and festivals, such as "Umbria Jazz Winter", "Baronissi Jazz", "International Folk Music Festival" (Boston), "Barga Jazz", "Terracina Jazz Festival", “Festival-Concorso Viva il Jazz" with an appearance in the RAI1 TV show " Viva il Jazz", "Festival Jazz di Malta", "Crest Jazz Vocal" (France), “Villa Celimontana Jazz Festival”; “Summer fest” opening of the concert of Giorgia, main pop-black music italian singer; “Crossroads 2004”; “Donne in Jazz 2004”; “AlatriJazz”; “Women Jazz 2005”; “Le Città del jazz” together with the Massimo Nunzi Jazz Orchestra at the Teatro Sistina, one of the most important theatres in Rome; “Casa Del Jazz” 2006 ; Italian Women in Jazz, in New York. Since 1996 she takes part in the Vocal Gospel Ensemble Vocintransito, together with Sara Berni,Simona Rizzi, Desirée Petrocchi and Fabiola Torresi. Since February 2003 she has taken part in the improvisation workshop-orchestra, “Alea Ensamble”,(Montepulciano SI) conducted by Paolo Damiani , director of the French National Jazz Orchestra. Splash (!) has hence pubblished the related cd. She has worked with a few among the top musicians of the Italian jazz environment: Rosario Giuliani, Pietro Lussu, Pietro Ciancaglini, Lorenzo Tucci, Emanuele Basentini, Carlo Atti, Aldo Bassi, Marco Di Gennaro, Mauro and Carlo Battisti, Pino Jodice, Andrea Beneventano, Eddy Palermo, Luca Mannutza,Pino Jodice, Pietro Iodice,Joseph Lepore. In New york she performend with Danny Grissette and Quincy Davis. She has also worked with Miriam Makeba, Andy Gravish, Lee Konitz, with whom she participated in the "Concerto per l'Epifania" in S. Chiara, Naples, broadcast by RAI 1 (2003). Since 1994 to date she has been the guest in several RAI and Mediaset TV shows, such as "Papaveri e Papere", "Cercando Cercando", "Uno Mattina", "Tutti gli zeri del mondo" where she sung with Miriam Makeba. She has appeared in film soundtracks with M. Andrea Guerra, M. Bruno Lochi, Walt Disney Italia, Dreamworks She wrote the music and some arrangements for Miss Italia 2005, participated as a soloist and sung together with the Vocal Gospel Ensemble Vocintransito. Recently she has also been engaged as composer: in 2001 and 2002, with Fabrizio Bondi, she wrote the music for two pilot episodes of "Scuola di Fiction di Mediatrade"; in 2003 she wrote the music for the theatre show "Collected Stories" directed by Carlo Benso, staged at the Teatro dell'Orologio in Roma. In 2006 she wrote the music for the theatre show “Non Mi Toccare” staged at the Teatro Politecnico in Rome. Also she wrote the arrangements for “2Teatro2” by Stefano Benni staged at theatre Cometa off in Rome. She teaches currently and has taught since 1997 in different important schools of music in Rome such as Saint Louis Music College (since 1976), and in various workshops around Italy such as Jazz's Cool – the most important course in Italy regarding jazz high specialization organized cooperating with ‘Casa del Jazz’ in Rome (main carrefour of jazz culture in Italy). In 2003 she carries out her first cd “A secret Place” label AlfaMusic, recorded with the trio she usually performs with: Luca Mannutza on piano, Marco Loddo on counterbass, Nicola Angelucci on drums, and featuring as guest star Rosario Giuliani on sax , a Dreyfuss Lable artist. In June 2004 she performs at the Auditorium of Rome, Parco della Musica, within the charity soirée Jazz for Children, organized by Save the Children, among some of the most important italian jazz artists. During 2004 she accomplishes together with the actress Laura Nardi and the musician guitar player Claudio Riggio the project Voci e Suoni [Voices and Sounds], poesie d’amore e collera [love and rage poems]. The performance is staged in the ancient roman houses beneath the Basilica di SS.Giovanni e Paolo. In July 2003 within the “Summer fest” she performs in Lucca together with her jazz quartet. in the opening of Giorgia's concert, main pop-black music italian singer. In 2005 she completed the recording of the concert and live CD for MTV GIORGIA UNPLUGGED, first italian mtv unplugged ever recorded. In 2005 she starts working together with the painter and dancer Fabiana Yvonne Lugli and her team Sign Of Sounds to carry out a project of music and action painting. In 2005 she is included with an original composition within the first Italian Jazz Real Book pubblished by Charish. In 2005-2006 she organizes the first and second edition of the jazz festival “IncontrinJazz” in Tuscania and Montalto di Castro. In October 2006 she partecipates in the Italian Women in Jazz Festival, in New York at the Synphony Space Theatre.
Web Side:
http://www.myspace.com/susannastivali