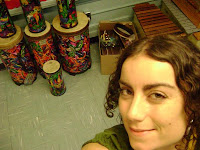 Catarina comes from Barreiro, Portugal, and since a young child she was exposed to all genres of music, more specifically jazz and funk, gospel, and also traditional music from Portugal, Angola, Cape Verde, and Brazil. She grew up in a neighbourhood where Portuguese, Angolans and Cape Verdeans lived alongside and share their lives. When a teenager, she started writing her first songs. In 1998 she was the lead singer and co-composer in her first band, “Edworld”, which fused jazz and pop music. At the same time she studied Voice at Lisbon’s Conservatory of Music and Jazz Performance at Luis Villas-Boas Jazz School, where she was invited to teach Voice and Improvisation, as well as adjunct-conducting the school’s Jazz Vocal Group. She sang in various formations as a jazz singer, and started at that time fusing Brazilian and Angolan music in her repertoire. In search of more musical challenges and knowledge she comes to New York, where she completed a BFA in Jazz Performance, graduating Suma Cum Laude, and studied with John Pattittuci, Janet Steele, Jonathan Pieslak, Sheila Jordan, Paquito de Rivera, Mike Holober, Neil Clark, Ed Simon, Duduka da Fonseca and others. She also studied Orchestration with composer Daniel Ott, at the Juilliard School. Catarina has been working as a singer, percussionist and composer in New York City, and is an African and Afro-Brazilian music researcher. As the first main vocalist of Scott Kettner’s Nation Beat, she traveled to Recife, Brazil, and had the opportunity to study North Eastern Brazilian music with masters like Mestre Salustiano, Dona Cila do Coco, Aurinha do Coco, Jorge Martins from Maracatu Nação Estrela Brilhante, and others. The strong connections between this culture, Portuguese, Angolan, and Cape Verde an cultures made her understand herself deeply, and all these experiences made her know exactly how to express a unique and new sound, that incorporates the expression a Portuguese-Afro-Brazilian world of rhythms and melodies that are always in eternal exchange, with a contemporary approach. She is the lead singer and percussionist in “Maracatuniversal”, Nation Beat’s debut cd, recorded in Recife, in collaboration with Nação de Maracatu Estrela Brilhante, as well as other great artists of Pernambuco state, and she will be featured in Brazilian guitarist Bina Coquet’s new cd, as well as in Raquel Rivera’s “Magdalena” debut cd. Her debut record, “No Balanço do Mar”, produced by Eduardo Nazarian and herself, is to be released in the Spring of 2009, with her own compositions, and includes great musicians from Cape Verde, Angola, Mozambique and Brazil, such as Miroca Paris (Cesaria Evora), Rolando Semedo, Costa Neto (Sara Tavares), Vaisse (Lura), Mick Trovoada (Sara Tavares, Buraka Som Sistema), Mucio Sa, Nancy Vieira, Eduardo Nazarian, Alfredo Bello (Projeto Cru), Bina Coquet and Bruno Buarque (Céu, Barbatuques). “No Balanço do Mar” is a beautiful record on which Catarina proves she is a very talented singer/song writer. Her compositions are the result of her experiences as a musician, and fuse naturally different accents and languages, from Cape Verdean Creole to Portuguese. She is an acclaimed performer, and her soft and rich tone is at times strong and powerful, or calm and serene. In an honest and innovative way she is an important element of a new generation of musicians and composers seeking new approaches to traditional styles of music. Catarina has traveled the U.S. Brazil and Portugal performing, and also doing Master classes at a University level, at Syracuse University and University of Florida. Her beautiful voice and presence have been acclaimed at the Avery Fisher Hall at The Lincoln Center (New York), Joe’s Pub (NY), Cornelia St Cafe (NY), Tonic, The Stone, Sweet Rhythm, Barbes, Pregones Theatre, CUNY Jazz Festival, The United Nations Church Center, Bomplenazo at Hostos Community College, The Harbour Conservatory for The Performing Arts, Enzo’s Jazz, Black Repertory Theatre (Rhode Island), The University of Florida Performance Center, The Georgia Theatre, (Athens, Georgia), Nectars (Vermont), Porto Musical (Brazil), Livraria Cultura’s Auditorium, Hot Clube de Portugal (Lisboa), Teatro S. Luiz, Auditório José Figueiredo, RDP Africa’s Performance Center, etc.