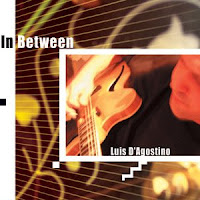 Born in Buenos Aires, Argentina,Luis Dagostino is a virtuoso player whose styles span the spectrum from the flashiest of rock music to the most subtle and sensitive jazz interpretations. After moving to the UK in 1999,where he lived until March 2008, Luis performed in several of the most important venues of the country with his own trio and in duo with fellow guitarist Pete Oxley like The Royal Festival Hall (London), The National Theatre (London),The Queen Elizabeth Hall (London), Pizza Express (Soho, London), The 606 Club (Chelsea, London), Festival of Arts of Edimburg and Marlborough Jazz Festival among others. He recorded during that period one album as a band leader ("In Between", Flat Five Records) and two albums with Pete Oxley ("The Play of Light" and "Double Singular" for 33 Records). He has been also Senior Lecture at Oxford Brookes University in Oxford for seven years and played as a free lance musician with Jamie Cullum, Gilad Atzmon, Bobby Wellins, Tony Kofi and the american singer Tessa Souter. Between 1983 and 1995, Luis toured extensively through Latin America and Europe with several artist of the popular "New Song" movement. He then moved to Los Angeles and participated in the Encore Program at the Musician Institute where he took advanced classes of improvisation and jazz harmony with Scott Henderson, Bob Magnusson, Ron Schete among others and lately guitar legend Joe Diorio before becoming Director of the Yamaha School of Popular Music and endorsee of Yamaha Guitars for Argentina. Ricordi Music also has been published in Latin America his two books: Toco Solo (1995) and Improvisacion, una guia completa para el musico de Jazz Blues y Rock (2003). Luis returned to Argentina in March 2008 where he plays, teach privately and work on his third book.
Web Side:
http://www.myspace.com/luisdagostino