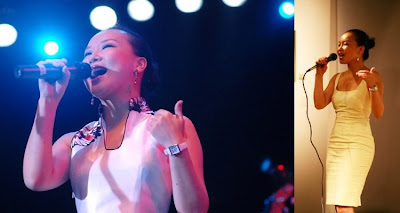 Jasmine Chen
Jazz / Fusión / Chinese traditional
(Shanghai - China)
Growing up in an artistic family in Northeastern China, Jasmine’s parents are professional folk dancers, actor and actress. She started to take piano lessons since age four; from age 19 to 24, she studied western music in England UK, and graduated from Leeds College of Music in 2004. During her study in LCM, she became passionate about jazz singing, so she took singing lessons with British vocalists Louise Gibbs. After achieving BA(Hons) in Music Studies, she moved back to China, located in Shanghai to begin her musical career working as a freelance vocalist and lyricist. Since then she's been performing in city's main jazz venues, including the ‘twocities in tune’ concert series at twocities gallery, JZ All Star Big Band at JZ Club, House of Blues & Jazz. In August 2008, Jasmine released her first album ‘The Color of Love’ with New York pianist Steve Sweeting, an album with jazz tunes, Brazilian numbers, Chinese old songs and originals. And all the songs in this album are in Chinese, including 7 original lyrics she wrote.
Web Site:
http://www.myspace.com/jasminechenn