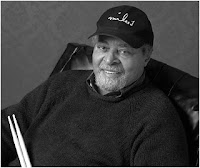 Band:
Jimmy currently leads the Jimmy Cobb "So What" Band, celebrating 50 years of Kind of Blue and the music of Miles Davis. As a result of his rhythmic timing, his unsurpassed experience, and unique style, Cobb is one of the most sought-after jazz musicians today.

Datos: http://en.wikipedia.org/
Legendary jazz drummer, Jimmy Cobb, was born in Washington, D.C. on January 20, 1929. A superb, mostly self-taught musician, Jimmy is the elder statesman of all the incredible Miles Davis bands. Jimmy's inspirational work with Miles, John Coltrane, Cannonball Adderly and Co. spanned 1957 until 1963, and included the masterpiece "Kind of Blue", the most popular jazz recording in history. He also played on "Sketches of Spain", Someday My Prince will Come", "Live at Carnegie Hall, "Live at the Blackhawk", "Porgy and Bess", and many, many other watershed Miles Davis recordings. Jimmy remains active, not only in New York City, where he leads Jimmy Cobb's Mob but on the international circuit including Japan, China, Netherlands, France, Germany, Italy, & South Africa. Join THE JIMMY COBB FAN CLUB and keep up to date with special deals on recordings, tours, and information.