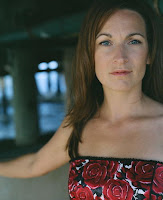 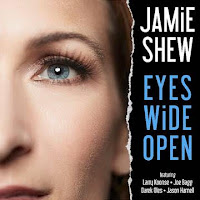 Jamie Shew is a vocalist, arranger, composer and pianist. On her newest project, EYES WIDE OPEN, she uses song to tell the story of her 20-year relationship with her husband, bass player Roger Shew, and the loss she experienced when he succumbed to cancer. The music follows the arc of her life from the early days of their relationship through Roger’s illness and beyond. Jamie has been playing piano for as long as she can remember. She met Roger at Washington State University where she studied jazz piano and got a Bachelor’s Degree in Music Education. The couple married right after graduation and went off to Western Michigan University together, where they both earned Master's degrees in Jazz Studies.  Jamie and Roger moved to LA around 15 years ago and soon established themselves on the local jazz scene. Jamie’s extensive musical training informs her singing. Her timbre is warm and inviting, while her timing, phrasing, and ability to interact so well with the band reflects her years of study. Of course, it doesn’t hurt that she’s playing with some of the finest musicians in Southern California including guitarist LARRY KOONSE, pianist and Hammond B3 player JOE BAGG, bass player DAREK OLES, and drummer JASON HARNELL, who are leaders in their own right. Jamie chose songs she had considered recording in the past, but now they took on new meanings for her. She wrote two original compositions and selected and arranged the rest with a lot deliberation. Each song became a metaphor for her journey. Despite the inherent sadness of the story, she isn’t a dark person, nor was Roger, and she made sure the CD wasn’t weighed down with a dark vibe. EYES WIDE OPEN is a project imbued with love and loss but eschews mere sentimentality. Jamie doesn’t just perform moving interpretations of these songs, she opens her heart and exposes the genuine, raw feelings that have propelled her to make this CD. Her innate musicality are showcased in her phrasing and tone, but it’s how she reveals the depth of the human condition that sets this project apart.