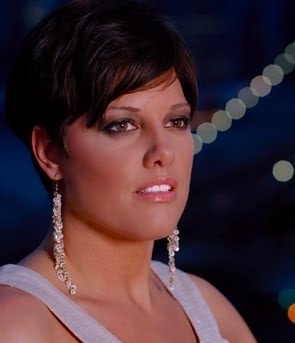 Cassandre McKinley has never been compared to another famous singer "before her time". Instead, McKinley has enriched her musical surroundings with something honest and refreshing. Her approach to jazz is organic, instinctual and from the heart - most simply describe her as "authentic". Drawing from a diverse group of influences, McKinley has developed a sound and style that is so unique, there's no comparisons. Her voice is a blend that is true "soul" at it's core - a sound that is pure, yet sophisticated and distinctive. Many will tell you that McKinley gives every ounce of herself to the music - and the strength in her vocal performance, while dynamic and clear, leaves one wondering where this seemingly endless reserve of vocal power and prowess comes from.
McKinley grew up 20 minutes outside of Boston. She trained as a singer, dancer and actress at a very young age, but was never extreme in her focus for one or the other. The dance company she studied and performed with kept her well rounded and allowed her frequent trips to Boston and NYC where she could fulfill her passion for the arts. She began working with a vocal coach; Beatrice was a European opera singer who had retired professionally and was teaching students at The Boston Conservatory of Music. McKinley went on to attend the college and formed a special bond with the teacher.
After college, McKinley rooted herself in the city where she spent time cultivating her music skills. She frequented musical venues - listening and absorbing. Occasionally, she would have the opportunity to sit in and sing which lead to a few guest appearances in larger venues (The House of Blues, Ryles Jazz Club). It had become clear to those that had worked with McKinley, to her growing number of local fans, and McKinley herself that Jazz was not only something she had a special knack for - she felt more passion for it than any other style of music.
Her first legitimate jazz gig - McKinley took a leap of faith and asked some of Boston's most well known players to accompany her on the gig. They obliged. From that point on, she would continue building musical relationships that would strenthen her artistically. Dick Johnson (Artie Shaw Orchestra), Herb Pomeroy, Al Vega and a list of local legends - world class performers - all spent time with McKinley with a willingness to advise and educate the young singer. "Friendships like these are a gift - those gentlemen shared thier philosophies with me - they each taught me to trust my instincts". McKinley admits that the jazz form and the art of "improvisation" appeals to her. "I love the freedom that comes with singing jazz - although there is still a form to the music, it can move and bend - it all depends on what's inside the soul and how you happen to apply it".
When asked who her influences are, she answers with a surprising mix. "Dinah Washington, Anita O'Day, Miles Davis, Sam Cooke, Marvin Gaye, Cat Stevens, Ray Charles, Stevie Wonder, Nancy Wilson - even Elvis. Drawing from this diverse group, McKinley has developed a sound and style that is unique to her like leaves on a tree. Her soulful blend is simple, yet sophisticated - true and distinctive.
Cassandre has just released her debut album under the MAXJAZZ label titled TIL TOMORROW - REMEMBERING MARVIN GAYE. In this body of work, McKinley delivers her interpretation of selected music Gaye wrote, co-wrote and performed throughout his career. From inception to execution, McKinley's sensitivity to Gaye's message and her rich, warm sound combine to pull this project far, far away from the ordinary. Creating a genre that just fits between Jazz, Smooth Jazz and R & B, "Til Tomorrow" is a rich exploration into Nu-Jazz and Soul - focusing on the "soul".