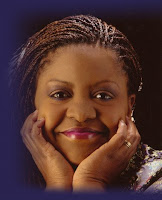 Born in Austin, Texas and raised in Altadena, California, Carmen Bradford grew up with music in her home, and in her heart. The daughter of legendary trumpeter/composer Bobby Bradford and world renowned vocalist Melba Joyce, it was only natural that Carmen followed in the footsteps of her musical parents. She has since carved out a place in music history for herself, one that is still growing and evolving, and is playing an integral role in this uniquely American art form called jazz. The featured vocalist in the legendary Count Basie Orchestra for nine years, Carmen was discovered and hired by Mr. Basie himself. She has since performed and/or recorded with; Frank Sinatra, Nancy Wilson, Herbie Hancock, Lou Rawls, Wynton Marsalis, Tony Bennett, James Brown, George Benson, Doc Severinsen, Willie Nelson, Lena Horne, Regina Carter, Patti Austin, The Lincoln Center Jazz Orchestra, Joe Williams, and many others. Carmen performed on two Grammy Award winning albums with the Basie band in the eighties, and later collaborated on a third Grammy Award winning album, “Big Boss Band”, with guitarist George Benson in 1991. Their celebrated performance of that classic duet, “How Do You Keep The Music Playing?” on the Johnny Carson Show that same year brought Carmen into homes across America in a way they had never seen her before.Carmen’s solo career took off with her critically acclaimed debut album “Finally Yours” (Evidence Records) in 1992, and began another chapter in her illustrious career. Her follow-up solo release “With Respect” (Evidence Records) in 1995, established the Los Angeles based singer as one of jazz music’s most diverse and exciting vocal stylists—and proved to the world that Carmen Bradford was a unique voice in jazz in her own right. Returning to collaboration and making more history, Carmen teamed with singer Kenny Rankin for the Benny Carter Songbook Project. “What an honor!”, she exclaimed as she looked around the room at the many faces of music history involved in the making of this special album; Joe Williams, Ruth Brown, Bobby Short, Peggy Lee, Shirley Horn, Jon Hendricks, Dianna Krall, Dianne Reeves, and many more. Carmen was chosen to sing “Key Largo” for the Grammy Award winning album. Her performance on “The Benny Carter Song Book” marked Carmen’s fourth studio collaboration that would shine in the Grammy spotlight. Carmen has also on occasion lent her voice to the music of Hollywood films, she sang on the haunting soundtrack for Oprah Winfrey’s “Beloved”, and also Dori Caymmi's modern re-working of legendary movie theme songs entitled “Cinema”. Caymmi's brilliant arrangement of Bonfa's classic “Black Orpheus” required Miss Bradford to render the lyrics in Portuguese.Carmen completed a recording and performance project for education with Wynton Marsalis and The Lincoln Center Jazz Orchestra entitled "Essentially Ellington". She also teaches privately when her schedule affords her the time.“Home With You” (Azica Records), a warm, beautiful collection of piano/vocal duets with pianist Shelly Berg, is Carmen’s latest solo recording. The album is yet another departure for Carmen, offering her fans a stripped down, intimate portrait of the artist they have grown to love. At present Carmen performs often in support of her new duets album with Mr. Berg, and also with her trio, and still performs with the legendary big-bands; Doc Severinsen and his Orchestra, The Count Basie Orchestra, The Lincoln Center Jazz Orchestra, and many others.
http://www.carmenbradford.com/