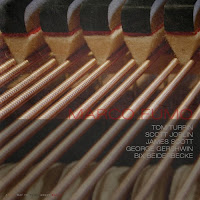 MARCO FUMO is considered to be one of the best interpreters of Afro-American piano repertoire. After a satisfying initial career in classical music, Marco carefully studied ea rly Ragtime, analyzing the origins of and influences on early Ragtime piano. The result is a repertoire that embraces a century of literature: from the Cuban Dances of Saumell, Gottschalk and Cervantes up through Gershwin and Duke Ellington, including composers of Ragtime and Stride Piano such as Joplin, Scott, Lamb, Matthews, Morton, Waller, Johnson, Jackson, Smith, and many others.Marco has also studied and been involve in film music composition; he professionally collaborated with Nino Rota and Ennio Morricone for over a decade. Marco Fumo has performed in all major Italian cities and in many major cities through Europe and the US. He has taken part in prestigious festivals of classical and jazz music.Moreover, Marco has played under the baton of N. Rota, D. Renzetti, N. Samale, G. Gaslini, E. Morricone, G. Schuller, E. Intra, and B. Tommaso. He has given première performances of pieces dedicated to him by Rota, Chailly, Gentilucci, Canino, Morricone, and Di Bari.Marco has recorded for RAI, RSI, and Radio Vatican, as well as the Pentaphon, Edi-Pan, Fonit-Cetra, Dynamic, and Soul Note labels.Marco Fumo has taught piano in many conservatories: Matera, Bari, Pescara, Udine and Castelfranco Veneto. At Castelfranco, he concluded a very important experience: a Biennium of specialization in Afro-American Piano Literature. He has also taught Civics Courses of Jazz in Milan for many years through the International Academy of the Arts. He holds seminars and courses in several cities.He has frequently collaborated with researchers and journalists such as M. Piras, S. Zenni, R. Scivales, M. Franco, and F. Fayenz.During the last few years has played in piano duet with Hugo Aisemberg, Kenny Barron, and Enrico Pieranunzi.Since this year is vice-chairman of SIdMA (Italian Society of Afro-American Music)