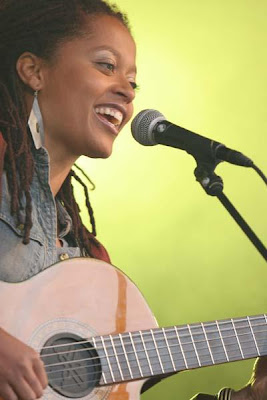 Sara Tabares
(Portugal)
Acústica / Folk / Pop
World Music
Sara Tavares was only 16 years old when she won two of Portugals most prestigious TV music contests. Born out second generation Cape Verdian immigrants, Sara grew up between two cultures. Initially known as a singer and composer of Gospel, Funk and Soul, she gradually incorporated more African music in her compositions. Her second album Mi Ma B, produced by Parisian Lokua Kanza, reached gold in Portugal and was a mix of African rhythms and melodic pop songs. After a long wait of five years, finally her new album Balance was released in February 2006. On this record, produced by Sara herself, she wrote and composed all the songs and played many of the instruments. Balance is a beautiful record on which Sara shows to be a very talented contemporary singer/song writer, who has managed to combine in a subtle and honest way contemporary music with her African roots.
Web Site:
http://www.myspace.com/saratavares