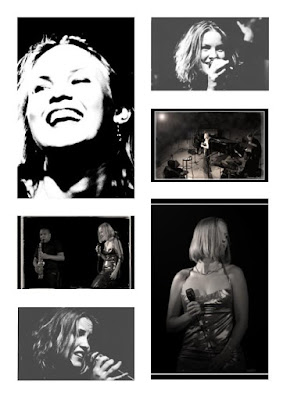 CARITA BORONSKA
Jazz / Soul / Pop
Composer, Singer, musician, writer..
Carita Annika Boronska was born in Uppsala, Sweden. She has been working as a Singer, Songwriter, Composer and music/vocal teacher in Madrid for many years. Caritas ALBUM "Jazzuality" was RELEASED IN SPAIN IN march 2007 by "Paco Ortega" on the label "El Pescador de estrellas" / EMI. The album has been well recieved by the press and media (radio/TV) and had pretty good air-play within it's category.
Since 2002 she composed music for several TV-programs and 2 FEATURE FILMS; "ERES MI HÉROE" (You're my hero),2003 which she won a SILVER MEDAL PRICE for in the PARK CITY FILM MUSIC FESTIVAL 2007 and the other a TV-Movie(Comedy)"Un difunto, 6 mujeres y 1 taller" (A dead man, 6 woman and a garage)2005. In 2006 she scored music for the short film THE TRENCH.
She also worked in PUBLICITY (CocaCola, Renault, Kia, Iberia, Laiker etc) and as a singer in various music festivals (mainly Jazz)and SANG/ACTED in a movie called "LA GRAN VIDA" (Living it up) with Salma Hayek/Carmelo Gomez.
In the same year "Carita" released her first single with a pretty original version of "THE BEAT GOES ON" (Sonny&Cher). VIDEO:"The beat goes on" is also on the soundtrack of "Living it up" and other compilation cd:s. Carita studied at "Berklee College of music" where she won various scholarships and song contests.
The ALBUM "Jazzuality" includes 6 of her own songs and some covers (Jazz/Swing-vibe)and has been recorded in "Musigrama", one of the best studios in Madrid where during 30 years it has been visited by musicians and artists like Paco de Lucia, Bebo Valdés, El Cigala, Stevie Wonder, Take That etc etc.
MUKTI Chill is an album recorded by Nantha Kumar, Carlos Koschitzky and Carita Boronska. It is a very special combination of Indian-Swedish-Latin flavors based on filmmusik and ethnic-electronic rythms.Apart from the cd the band plays LIVE with voices, tablas and indian percussion, electronic loops, cello and other invited musicians.
Throughout her career, Carita has had the opportunity to know and work with a wide range of famous musicians, including Richard Evans (producer/arranger for Natalie Cole, Laura Brannigan, Tower of Power, Stan Getz, Dianne Schuur etc.), Bob Cranshaw (bass player with Sonny Rollins, Milt Jackson etc.), Jim Beard (keyboard player and producer with Wayne Shorter, Mike Stern, Bill Evans etc.), David Murray and Randy Brecker.
Web Site:
http://www.myspace.com/caritaboronska